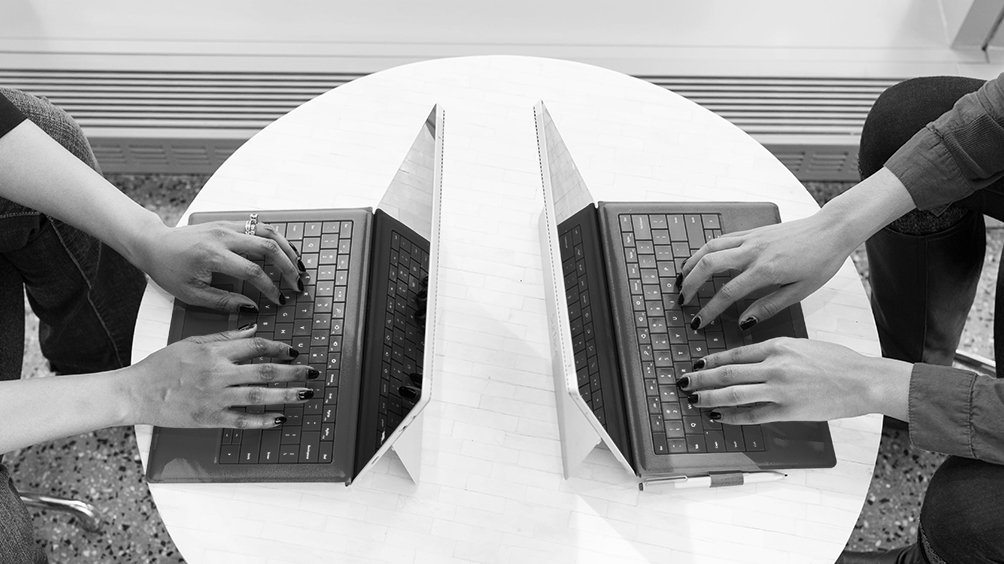 The concept of “patterns” is a familiar one to designers—descriptions of repeatable forms that a given technology can take. Most design patterns describe a way a person interacts with a technology. For example, the act of finding books (and much else) is largely dominated by Amazon. Amazon’s software design leverages countless technology patterns—from patterns dealing with information such as a menu or search, to those dealing with interactions such as a haptic buzz that confirms I’ve put something in my cart. The Amazon app orchestrates these technology patterns in a way that makes it nearly frictionless to shop, and the larger technology pattern of nearly “instant delivery” commanded from the app is becoming entrenched.

Amazon’s enormous investment in Alexa—technology aspiring to increasingly human-to-human-like interactions—is one sign in this growing trend. As is Amazon’s move to opening actual physical bookstores, where customers mingle together and with front-line staff, after having been a huge factor in the decline of the independent bookstore. Is this a sign that companies like Amazon understand that crafting solutions based on interpersonal behavioral patterns is increasingly necessary? Or is it simply a market opportunity now that they’ve dominated, then transformed, the market environment?

After moving to Austin in 2012, I noticed a behavior around public parking. Many of our parking meters take a credit card and spit out a sticker for drivers to place inside their windshield. Parking enforcement can easily see information on the sticker, including the time that the parking expires. However, when a driver initially buys a parking pass, it’s hard to accurately predict how long they might be parked. Lunch might run longer than expected, a colleague could ask them to come help with something at work—any number of variables can make an estimate wrong. Additionally, not every parking spot in the city uses these types of tickets (some meters have a more traditional on-meter display), and some spots don’t require payment at all—so even if a driver moves to a different location, there is no guarantee they can use their paid-for time. So many of us “round up”—to make sure we have enough time, we overestimate.

Austin residents’ response to this meter system shows a glimpse of collaborative behavior. If a driver has a sticker with valid time left over, they often stick the ticket back on the meter machine and let the next person who parks nearby claim the remainder of the time. It is charming, practical, and contributes to the feeling of a friendly Texas city.

Small, design-like, acts spontaneously carried out are what Jane Fulton-Suri of IDEO popularized as “thoughtless acts.” Her book on the subject explains that we “interact automatically with the objects and spaces we encounter,” such as when we drape a jacket over a chair in a busy café to “claim” it.

The parking meter-related behavior of leaving behind unused resources for the next person is a similar act, though it is an interaction with people as well as objects and spaces. Rather than “thoughtless,” it’s quite a thoughtful act.

This behavior can be described and codified into an interpersonal behavioral pattern.

There are many technology patterns involved in using the parking meter machine, like inserting a credit card or using a sticker. Similar to technology patterns, the act of leaving unused time for another driver is describable and repeatable. However, this is about human-to-human interactions—instead of human-to-machine. It is the interpersonal behavioral pattern of how people look out for anonymous others, people like themselves who will park and need to pay for it.

This pattern is substantial in that it resonates with other, similar manifestations, such as the “leave a penny, take a penny” dish at a local diner or “suspended coffee” throughout the world. The pattern is commonly described by the phrase, “pay it forward.” The pattern is durable: it’s something people will recognize and respond to long after credit cards, stickers, or parking meters become obsolete.

The interpersonal behavioral pattern is not just interesting—it’s also useful.

Imagine if the city hired a design firm to redesign the parking system. There are endless ways this interpersonal behavioral pattern might be baked into the redesign to help humanize the system. The following concept demonstrates what that might look like.

In my working experience at various companies, I’ve noticed that technology-led design patterns are frequently used and acknowledged, but interpersonal behavioral design patterns are mentioned in one-off conversations, if at all. It is more common to hear discussions of constructing a feed or menu or gallery, than to hear discussions of how human interactions might influence a product design or service design. As technology becomes increasingly invisible, and accomplishing tasks becomes table-stakes, people will demand that products and services are not just “intuitive” but that they are also “human.” And for technology to be human, we need to devote intentional time and resources to finding, circulating, and applying interpersonal behavioral patterns.

Interpersonal behavioral patterns aren’t new, but they haven’t been explored or aggregated as widely in design as technology patterns. In different forms, however, they are found in fields as diverse as psychology and literature, and in history books, etiquette books, guidebooks, maps, policies, laws and more. For example, Sweden has the concept of “fika,” a break in the day to drink coffee and have a sweet pastry in the company of family, friends, or colleagues. While many countries have a culture around coffee, fika is about slowing down and connecting with others—it isn’t something to rush. We might call this the look up from work pattern. Interestingly, fika is important enough as a tradition (and successful enough as a pattern) to Swedish people, that it is even written into employee contracts!

If we accept look up from work as an interpersonal behavioral pattern, what ideas could it provoke about our workplace cultures here in the U.S.?

We can find another example in maps. The Blanton Museum of Art exhibited Medieval Monsters: Aliens, Terrors, and Wonders, organized by the Morgan Library in New York City, in October 2019. In it, one map of the world and its oceans is illustrated with fantastical deep-sea monsters. Rather than striving for an accurate depiction of sea life, the mapmakers used monstrous depictions to keep competing merchants from infiltrating lucrative sea routes.

This interpersonal behavioral pattern is one of making up terrors to keep out people, like competitors. We could call it a scarecrow pattern. While the map itself is a technology pattern, setting up barriers based on fear is an interpersonal behavioral pattern. A set of concepts created in 1992 by Sandia National Laboratories for the US Department of Energy for the Waste Isolation Pilot Plant (WIPP) leverages the scarecrow pattern as a speculative approach to keep future humans out of nuclear waste sites.

This is part of design research, but it isn’t well-formalized or collected.

Close, in-context, observation of people is an established hallmark of design. Any designer who saw the meter behavior I noticed during the course of an assignment or program, would likely note what I noted. However, as my city of Austin grows into a booming metropolis, the parking meter pay-it-forward behavior is getting lost. It could be that people feel less connected to each other, less liable for each other’s well-being. Or maybe so many transplants moving in from other cities have diluted the unspoken practice, since they didn’t know about it. Now, it is scarce to the point of no longer being available for ethnographers to notice. And that is why recording these types of real human behaviors, crystalizing them into patterns, and connecting them to similar patterns is so important and contributive to the field of design—and the work designers do every day to humanize technology.

“Thinking more broadly, how might we share these patterns in a similar way to how technology patterns have been shared, used, and reused?”

Observing and aggregating interpersonal behavioral patterns is not within the typical scope of a “design research program”—but it could be. What if we went beyond interviews and contextual inquiries and focused on larger interpersonal behavioral patterns? We would expand our understanding of human-to-human interactions by going to rich existing sources—by regularly travelling, reading history, and visiting museums, and building on these activities as a recognized part of our work. Exploring these areas and questions would help us envision and create a world in which technologies are designed and patterned on the interactions that make us the most human—the interactions we have with each other.