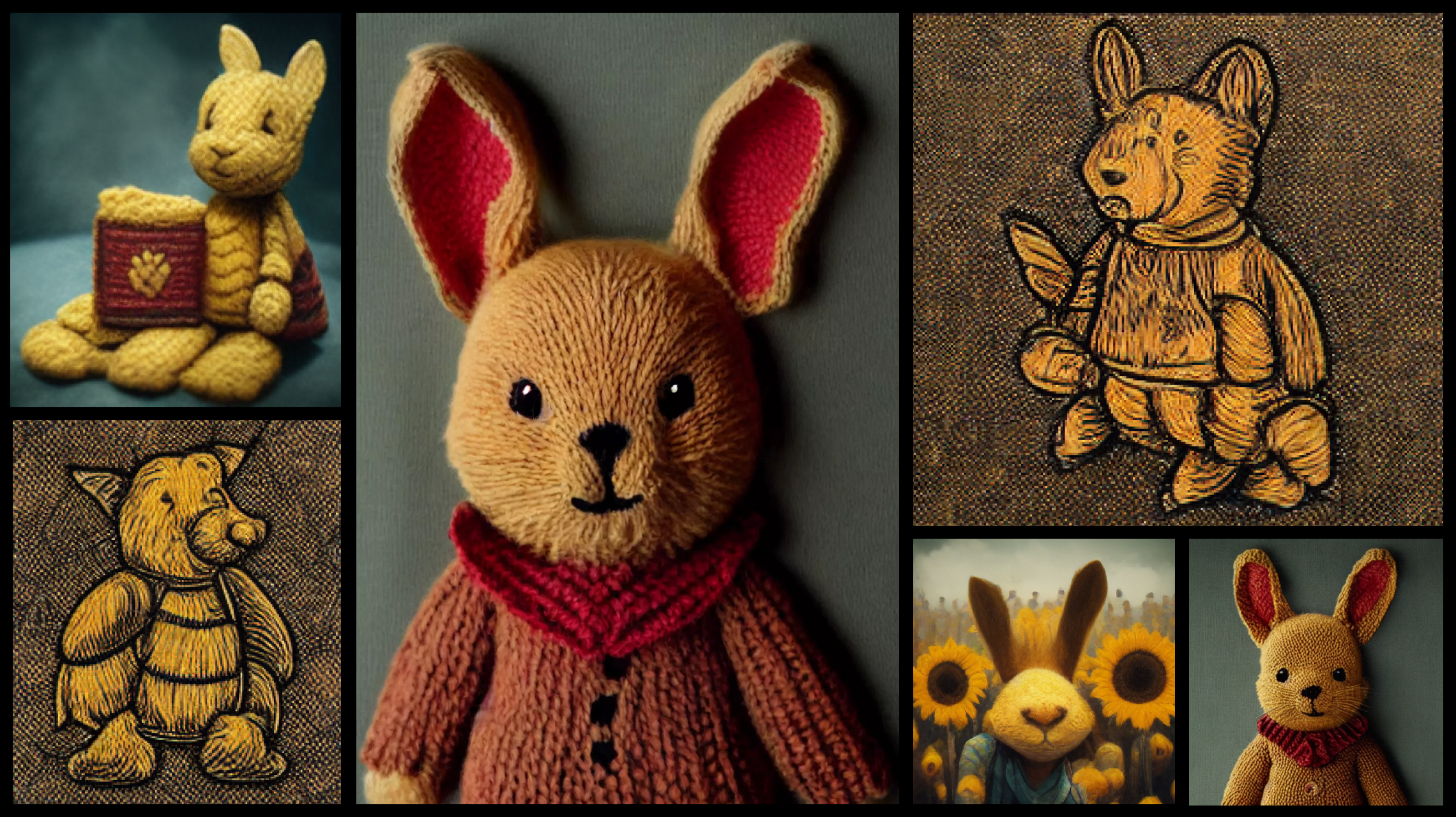 I “made this” by typing short phrases—like “Winnie the Pooh, combined with the Velveteen Rabbit, and knitted into a cute stuffed animal”—into a tool called Midjourney. The computer churns, using distributed GPU cycles, and after about 60 seconds, the images show up.

Designers find ourselves saying the phrase “I made this” a lot. It’s sort of a period at the end of the sentence of a creative push: after spending some time doing something creative, you sort of sit back, see what you made, and say “I made this.” The longer and more arduous the task, it seems, the more fulfilling an “I made this” is.

Midjourney is throwing I Made This on its head, because it’s fundamentally changed the effort-to-output ratio. It took me nearly no time, and very little skill—if any at all—to produce those images. And when I was done, I felt a dopamine hit just like when I throw a pot on the potter’s wheel, turn a bowl on the lathe, sketch a storyboard, or push pixels in Figma. I sat back and said, contently, I Made This.

Not only did I have a moment of “I made this”—I actually saved the images. The files are on my desktop, and I have no idea what to do with them. They aren’t photos I took to remember an experience; it feels silly to print them or frame them; they aren’t really worth showing to other people or sharing on social media.

This experience, and subsequent feeling, is putting the recent Théâtre D’opéra Spatial controversy in a new light. A participant in an art competition submitted a piece of art created in Midjourney, and won. To be clear, the winner typed prompts into a chat bot, just like I did with my bunnybear. The creator—and using that word is a little tenuous, but I’ll go with it—likely felt the I Made This pride, just like I did. And then they won a prize!

A painter can enter a painting contest with their painting, and traditionally, the best painter wins based on, well, the painting. But in the new Midjourney creative process, the computer owns the craftsmanship of the output. The designer owns a set of words. To win an art prize with words seems, largely, incongruent, and as indicated by the fallout of the art contest above, unfair.

Having spent 25 years in design, I can safely say that words are not the preferred tool of designers—many don’t like writing, and aren’t very good at it, either. But the craft of AI-based art generation is (at least for right now) primarily based on language, and so the skill of image creation is based on a new grammar for using words.

One way of thinking about this is a democratization of painting. This use of language as a medium might be construed as bringing a rich medium in reach to a broad set of users. It’s overstating “fairness” and overly simplifying the impact of tools like Midjourney, but it feels an awful lot like the progression of cameras in our phones—it’s pretty damn easy to take a fantastic picture now, without understanding anything about photography itself, and just about as easy to create a tight, professional video without any training in cinematography.

This form of creation, at least right now, requires computational power that is “rare”, in that the output isn’t instant. As a result, creators are forced to be much more precise when they…work. It reminds me of my college days, when we would queue up an Adobe After Effects render, hope for the best, and come back the next morning to see how it turned out. It’s like putting a glazed pot in the kiln and coming back 24 hours later to see the results, or even like dropping off canisters of film at CVS and coming back the next day to pick up the prints. The anticipation increases the sense of ownership, and forces a more methodical and exacting up-front sense of craftsmanship.

But when we advance beyond a mainframe-timeshare model to offer instant results, the creation demeanor will shift from a planned, thoughtful approach to a brute-force method of trial and error. As a result, the effort of input will continually drop, while the resolution of output will continually improve.

And perhaps the biggest impact of this type of technology shift—simpler and populist in input, beautiful and exclusive in output—is the spread of I Made This, warranted or not. While designers say “I made this” when we make something great, we also often say it not as a point of pride, but as something ironic—as if to claim a sense of disproportionate grandiosity around our job. Making things is, after all, fundamental to being a designer, and increasingly, fundamental to doing anything in the context of product development. To say “I made this” is sort of like an accountant saying, “I did your taxes.” And for most designers, we think of our work as somewhat egoless. Good designers don’t sign their comps or protect their ideas during a project; they view criticism and creative extension as a positive evolution of their work.

There’s a meme about “I made this”, too. It’s a shot at people stealing creative ideas, but we throw it around a lot in our studio because it also exemplifies collaborative creation. I Made This, and then my colleague built on it and She Made This, and so-on.

But Midjourney is all about I Made This pride. The community showcase highlights things various creators have made that they are proud of, and the highlights section offers a place for people to react—often sharing hundreds of hearts, thumbs ups, and on-fires:

This phenomenon is starting to upset a pretty fundamental part of culture. Right now, the pool of word-based-creators are pretty small. But social media has made the audience extraordinarily large. So I’m back to the pictures on my desktop. The motivation for the post was, in some sense, to share these pictures with you. Because I’m strangely proud of them.

After all, I made them.